Girls Prep Announces Landmark Three Year Partnership with BioBus to Develop the Next Generation of Female Engineers, Scientists and Mathematicians

Partnership to Cultivate an Early Love of Science to be Featured at the Advancing Girls in STEM Conference at the Franklin Institute, Philadelphia's Premier Science Museum 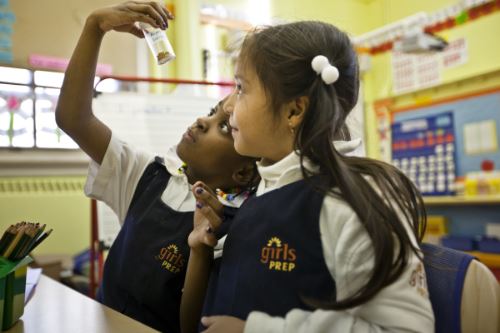 Ian Rowe, CEO of Public Prep said, “By establishing a strong foundation in math and science, Girls Prep and BioBus will help young girls develop a lasting love of inquiry, critical thinking and problem solving. This will in turn ignite a curiosity of STEM related pathways by young women, which is ultimately what's needed to bridge the race and gender gap in STEM fields.”

Over the next three years, Girls Prep and BioBus will have a multi-faceted partnership that includes the following components:

Sarah Weisberg, Chief Scientist at BioBus, said “I am thrilled that Girls Prep is embarking upon a multi-year collaboration with BioBus. I imagine a future in which all students, regardless of background, can access opportunities to do authentic science research and in-depth, hands-on experiments outside of school - and become prepared for a lifetime of engagement with science.”

As part of a unique collaboration between district and charter schools, girls in District 1 on the Lower East Side of Manhattan will be invited to participate in the Girls Prep/BioBus partnership. Daniella Phillips, District 1 Community Superintendent said, “Whether it is the District 1 Middle School Regents Academy in which Girls Prep scholars were invited to participate, or this wonderful BioBus/Girls Prep collaboration in which District 1 female scholars will do hands-on science, it is important that public charter and district schools find ways to partner in service to our students."

On March 17, The Agnes Irwin School and its Center for the Advancement of Girls will feature the Girls Prep/BioBus partnership at Sharing Solutions: Advancing Girls in STEM, a two-day think tank and conference, held at the Franklin Institute in Philadelphia. Given that the theme of the conference is "Partnering for Impact," BioBus and Girls Prep are being featured to help identify the key ingredients for what makes a sustainable partnership.

Girls Prep Lower East Side was founded in 2005 as the first and only all-girls public charter school in New York City; and Girls Prep Bronx was founded in 2009 to serve female scholars in the South Bronx. Girls Prep alumnae have now been accepted into some of the nation’s most prestigious colleges, including Yale University, Stephens College, St. John’s University and Howard University. Girls Prep is part of Public Prep, the nation’s only non-profit network that exclusively develops exceptional, tuition-free PreK and single-sex elementary and middle public schools. We are determined to graduate 8th grade scholars who thrive in “right-fit,” high-performing public, private, or parochial high schools, and ultimately earn a degree from a four-year college or university.

Founded in 2008, BioBus works towards a future in which all people can fulfill their scientific potential. BioBus cultivates this vision by creating immersive laboratory environments in which scientists join students for hands-on scientific exploration. This new kind of laboratory space is accessible and unintimidating, facilitating scientific engagement even amongst populations historically underrepresented in science professions. Within this space, scientists share their expertise and knowledge through direct, hands-on experiences, allowing participants to reshape their view of science through participation in the discovery process.