2016 also marks the fourth consecutive year in which 100% of the Girls Prep 8th grade graduating scholars were accepted into high-quality, "right-fit" college-prep high schools that will ensure the scholars remain on a path to college completion. Moreover, Girls Prep has become one of the premier feeder schools to leadership development programs such as Prep for Prep, TEAK, Breakthrough, Oliver Scholars and A Better Chance, and its alumnae now attend 33 of the top nationally ranked public high schools in NYC (by US News & World Report) and a range of top parochial, private and public high schools, including Philips Exeter Academy, Bard Early College High School, Manhattan/Hunter Science School and Sacred Heart Academy.

"As Chair of National Computer Science Education Week, I selected Girls Prep Lower East Side Middle School to be a launch site for a group of its sixth grade female scholars to build a working computer," said Diane Levitt. "I was thrilled to accept the opportunity to speak at the 8th grade graduation, and support Girls Prep in its quest to develop the next generation of female engineers, programmers, scientists and mathematicians."

Cornell Tech is a revolutionary model for graduate education that develops pioneering leaders and technologies for the digital age. Cornell Tech includes the Jacobs Technion-Cornell Institute, an academic partnership between Cornell University and Technion – Israel Institute of Technology. Cornell Tech has been up and running since 2012 at a temporary space in the Google building in Chelsea and now has more than 200 graduates. Cornell Tech’s state-of-the-art campus will open on Roosevelt Island in summer 2017. In her role leading Cornell Tech's K-12 partnerships, Ms. Levitt has a particular interest in addressing the lack of computer science education and other STEM content in New York City’s public schools, particularly among girls and underrepresented groups.

In April 2016, ten Girls Prep 8th graders toured Cornell Tech and sat down with Ms. Levitt and participated in an interactive panel with three female Cornell Tech graduate students to discuss careers for women in STEM. It was a unique opportunity for Girls Prep 8th grade scholars to meet “near-peer” mentors to learn how they navigated their path to Cornell Tech and cement the idea, in middle school, that they can have a future in technology and engineering.

"Girls Prep Lower East Side Elementary School is one of the only elementary public schools in the nation that requires its scholars to take daily science classes five days a week, taught by departmentalized instructors who teach nothing but science," said Ian Rowe, CEO of Public Prep, the non-profit network that supports Girls Prep and Boys Prep schools. "Securing Diane Levitt as Commencement Speaker further solidifies our relationship with Cornell University and underscores our mutual commitment to have girls develop a love of science and math from an early age."

For each of the last four years, ten Girls Prep Middle School scholars spent a week atCornell University in Ithaca, NY taking university level classes in physics, science fiction writing and veterinary science, as part of Girls Prep overall commitment to ensure every elementary and middle school scholar has immersive college experiences that demystify what it means to be successful in a college setting. In summer 2016, ten Girls Prep Middle School scholars from both its South Bronx and Lower East Side campuses will take classes at Cornell in Engineering and Writer's Circle.

Cornell Tech develops pioneering leaders and technologies for the digital age. CornellTech brings together faculty, business leaders, tech entrepreneurs, and students in a catalytic environment to produce visionary results grounded in significant needs that will reinvent the way we live in the digital age. Cornell Tech’s temporary campus has been up and running at Google’s Chelsea building since 2012, with a growing world-class faculty, and about 150 master’s and Ph.D. students who collaborate extensively with tech-oriented companies and organizations and pursue their own start-ups. Construction is underway on Cornell Tech’s campus on Roosevelt Island, with a first phase due to open in 2017. When fully completed, the campus will include 2 million square feet of state-of-the-art buildings, over 2 acres of open space, and will be home to more than 2,000 graduate students and hundreds of faculty and staff. For more information, visittech.cornell.edu. 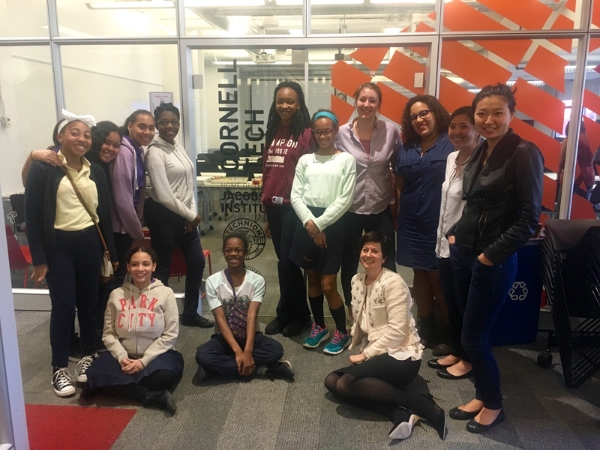