NEW YORK, NY - Public Prep, the nation’s oldest and only non-profit network that exclusively develops exceptional, tuition-free Pre-K and single-sex elementary and middle public schools, and Cornell University have extended their multi-year, multi-faceted partnership to incorporate computer science instruction and more opportunities for immersive, on-campus science, technology, engineering and mathematics (STEM) engagement. Through this College Completion Initiative, Girls Prep and Boys Prep Bronx Middle School scholars, as well as Girls Prep alumnae in high school, will have the opportunity to pursue week-long, campus-based experiences in which they take collegiate classes, live in dorms and get exposure to college life at Cornell’s campus in Ithaca, N.Y.

“This is a welcome partnership because our values are in lock step. If some of the young women of Girls Prep decide to matriculate at Cornell Engineering they will be joining a college that achieved 51% female representation for our first-year class that entered in fall 2017 and where the average GPA’s in the college are about at parity between men and women. Moreover, in addition to there being a growing number of under-represented minority students in Cornell Engineering, they are graduating at a rate of 87% with an engineering degree. This is all being done through the aid and dedication of the staff in Diversity Programs in Engineering.“ said Mark E. Lewis, Senior Associate Dean for Diversity and Faculty Development.

Diane Levitt, Cornell Tech Senior Director of K-12 partnerships and the Girls Prep Commencement Speaker in 2015, offered, “We are thrilled to work with Public Prep through the Teacher in Residence program. We appreciate and share Girls Prep’s high expectations for their students, and their commitment to preparing those students for the digital age. In Girls Prep we have found an ideal partner—leadership with vision, committed, highly professional teachers, and students excited about learning.”

“At Public Prep, we are determined to graduate 8th grade scholars who thrive in ‘right-fit,’ college-prep public, private, or parochial high schools, and ultimately earn a four-year college degree,” said Ian Rowe, CEO of Public Prep and an alumnus of Cornell Engineering. “These types of pre-college activities will help our Boys Prep and Girls Prep middle school scholars — and Girls Prep alumnae in high school — accumulate the types of collegiate experiences that better equip them to handle the academic rigor and social transitions necessary to successfully complete college on time.”

In addition to these immersive, summer college experiences, Girls Prep will participate in the Cornell Leadership Study being conducted in partnership with the National Coalition of Girls Schools by the Development of Social Cognition Laboratory led by Katherine Kinzler, Cornell associate professor of psychology and of human development. This study, funded in part by the Cornell Center for the Study of Inequality, aims to explore the benefits of an all-girls education on leadership ideals in elementary students.

Public Prep
Through its Boys Prep and Girls Prep schools, Public Prep now educates nearly 2,000 elementary and middle school scholars on six campuses in the South Bronx and Lower East Side of Manhattan. Since 2013, Girls Prep has had five graduating classes of 8th graders. There are about 300 Girls Prep alumnae now enrolled in grades nine through twelve. And ninety percent of the inaugural graduating class of Girls Prep 8th graders from 2013 is now, as freshmen, attending some of the finest colleges and universities in the country. Click here for a full list of the colleges and universities that are partnered in Public Prep’s College Completion Initiative.

About Cornell University
Cornell is a private, Ivy League university and the land-grant university for New York state. Cornell’s mission is to discover, preserve and disseminate knowledge, to educate the next generation of global citizens, and to promote a culture of broad inquiry throughout and beyond the Cornell community. Cornell also aims, through public service, to enhance the lives and livelihoods of students, the people of New York and others around the world.

About Cornell Tech
Cornell Tech brings together faculty, business leaders, tech entrepreneurs and students in a catalytic environment to produce visionary results grounded in significant needs that will reinvent the way we live in the digital age.

From 2012-2017, the campus was temporarily located in Google’s New York City building. In fall 2017, 30 world-class faculty and almost 300 graduate students moved to the first phase of Cornell Tech’s permanent campus on Roosevelt Island, continuing to conduct groundbreaking research, collaborate extensively with tech-oriented companies and organizations and pursue their own startups. When fully completed, the campus will include two million square feet of state-of-the-art buildings, over two acres of open space, and will be home to more than 2,000 graduate students and hundreds of faculty and staff.

About Cornell Engineering
Founded in 1870, Cornell Engineering is the preeminent engineering school in the Ivy League. The college has a long history of excellence in undergraduate and graduate education within the context of a uniquely broad and renowned research-intensive university. Its strengths have developed from a fearlessness to question established thinking, a genuine commitment to students, and a sincere desire to make the world a better place for all. Cornell Engineering faculty members dismantle conventional wisdom to discover new knowledge and invent transformative technology, develop innovative interdisciplinary research and programs, and teach students who will brighten our future. 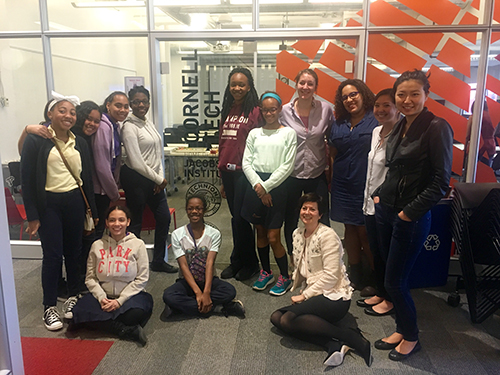