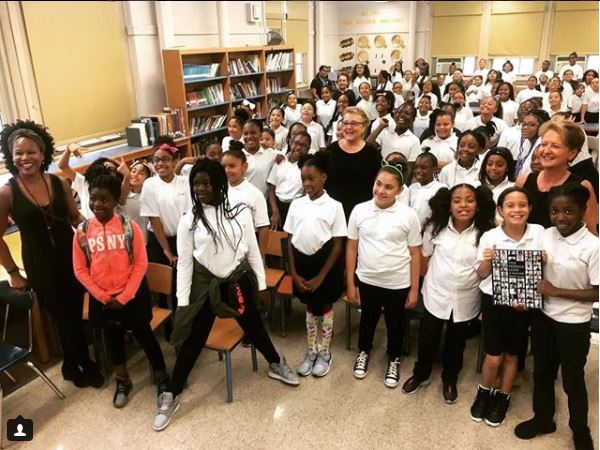 On September 26, at 8 AM on the campus of Girls Prep Bronx Elementary School at 681 Kelly Street, female pioneers including Majora Carter, a leading urban revitalization strategist and Peabody Award winning broadcaster; Edwina Dunn, founder of The Female Lead; and Nell Merlino, founder of Take Our Daughters to Work Day, will all join Jessica Diaz, Girls Prep Bronx Academic Director in a rich panel discussion about how increasing the presence of strong female role models is critical to developing the next generation of female leaders.

"Since our founding in 2005, Girls Prep has grown to now educate nearly 1,500 low-income, African-American and Hispanic female scholars, and support now 350 alumnae who are at top private, parochial and public high schools, or are freshman at some of the finest colleges and universities in the country," said Public Prep Superintendent Janelle Bradshaw. "Hearing from these amazing women is another step in Girls Prep long commitment to demystify what it means to develop female leaders."

The Female Lead book published by Penguin Random House, features sixty extraordinary women from all walks of life: from politicians to artists, journalists to teachers, and engineers to campaigners. The Female Lead Schools Network has donated more than 1,000 books to school in the United Kingdom and is in the process of donating another 8,000 books free to schools across the UK and 9,000 in the US, together with teaching materials. The goal is to create a space within the school day to talk about female role models and to explore the attributes, attitudes and behaviours which are found in successful women. Educators can sign up to receive a free book and teaching materials here:https://www.thefemalelead.com/for-schools.

Majora Carter, a Girls Prep “Namesake" who has a classroom named after her, noted, “It's never too early to plant seeds of successful self image and confidence in young minds. I benefitted from the same sort of examples that I hope to be for others.” Edwina Dunn shared that “The Female Lead book and teaching resources have been designed to open up more inclusive conversations about ambition in the classrooms as they harness the insights of sixty female leaders to offer personal testimonies and practical advice on carving out your own path.” Nell Merlino, “I am thrilled to be in The Female Lead book to continue the work I started with Take Our Daughters to Work Day. Now more than ever, girls need to see women leading to become leaders themselves. What better way to help girls see what they can be than to make 9,000 of these beautiful books and teaching materials available free to U.S. schools.”

Girls Prep Lower East Side was founded in 2005 as the first and only all-girls public charter school in New York City; and Girls Prep Bronx was founded in 2009 to serve female scholars in the South Bronx. Girls Prep alumnae have now been accepted into some of the nation’s most prestigious colleges, including Yale University, Stephens College, St. John’s University and Howard University. Girls Prep is part of Public Prep, the nation’s only non-profit network that exclusively develops exceptional, tuition-free PreK and single-sex elementary and middle public schools, including Boys Prep Bronx. We are determined to graduate 8th grade scholars who thrive in “right-fit,” high-performing public, private, or parochial high schools, and ultimately earn a degree from a four-year college or university.

About The Female Lead

The Female Lead is a non-profit campaign to make women’s stories more visible, founded by data science entrepreneur Edwina Dunn. The Female Lead aims to bring a diverse range of female role models to prominence for girls and young women providing inspiration when they consider their future and so they can all name one they relate to. The Female Lead works on three platforms: The Female Lead Schools Network program in schools, colleges and youth organizations; a website showcasing the stories of inspiring women and The Female Lead book published by Penguin Random House.

Latest news from The Female Lead

Edwina Dunn’s work on The Female Lead is the subject of a major new campaign in The Sunday Times, London. Thanks to groundbreaking research done for Sunday Times Style by Dunn’s data Science company, Starcount, it emerges that screen time can be harnessed in positive ways to motivate our daughters.

The Sunday Times Style, How to Raise a Female Leader.