Thirty-two students participated in a Hackathon organized by Barclays Women in Technology this October. In just 90 minutes, the students created their own mobile applications with help from the volunteers. The students worked in groups and presented their apps to a panel of judges. Many of the apps were inspired by the Girls Prep 3.14 Mile Run on Ultimate Pi Day, such as an app calculating miles run around a track using the Pi formula, while others applied different math concepts, such as a calculator converting sale percentages to dollars saved.

At the end of the Hackathon, students reflected on their experiences designing their team's mobile app and then writing the code to bring the design to life using the MIT App Inventor program. One student, Morayah (pictured below), said, "I was surprised by how much trial and error was involved. We would come up with an idea, and then have to change it based on what we could actually do." 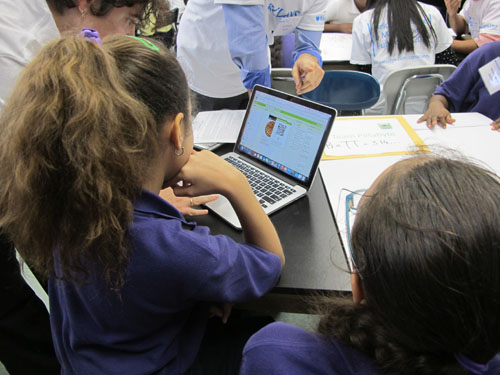