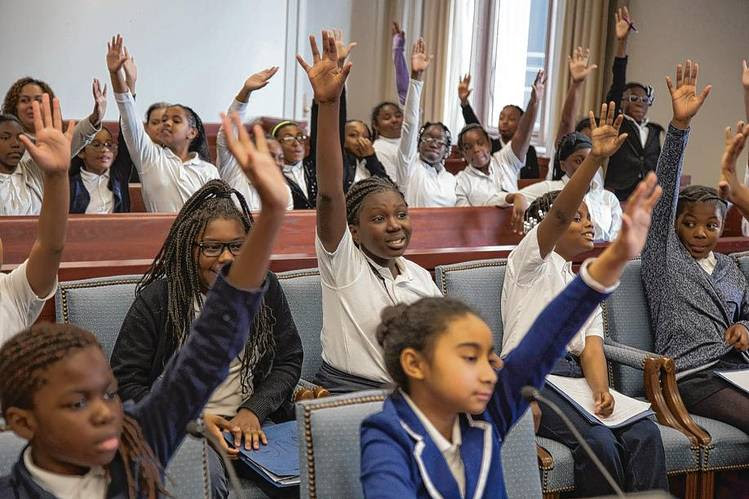 It wasn’t the usual trial before U.S. Bankruptcy Judge Shelley Chapman, who has presided over the collapse of investment firm Lehman Brothers and other complex corporate cases.

The slave rebellion left nearly more than 50 people dead in 1831. The students from the public charter school, which has mostly black and Latino students, debated whether Turner’s fight against oppression was a worthy defense.

“Slavery was as violent as the rebellion,” said 10-year-old Chelsea Colon, who played a defense lawyer.

The students stepped onto a cardboard box to speak over the courtroom’s wooden podium to Judge Chapman. They questioned witnesses, made arguments and high-fived each other when they finished.

The program is part of a push to increase the public’s understanding of the U.S. court system led by Robert Katzmann following his 2013 appointment as the top judge at the U.S. Court of Appeals for the Second Circuit. Most civics courses focus on Congress and the presidency, he said.

“If you look at civic-education curriculum, the role of the courts is not given much attention at all,” Judge Katzmann said in an interview. “It’s hard to understand why.”

The initiative, “Justice for All: Courts and the Community,” increased programs like courthouse visits, re-enactments of historic trials and student contests. More than 6,000 students participated last year in programs held at courthouses, Judge Katzmann said.

The fifth-graders from Girls Prep Bronx are some of the youngest to participate in the initiative. School officials said students in that age group are beginning to grasp the concept of injustice and advocating for others.

“It’s the age when they really start to recognize issues of fairness,” said Josie Carbone, a former principal who helped start the mock trial program two years ago.

Last year, the students put famous explorers on trial. The year before, they prosecuted a teacher who arbitrarily excused half the class from taking a difficult test.

The trial of Turner brought up discussions about stereotypes, institutionalized violence against minorities and the appropriateness of challenging authority.

“They could have used their words instead of violence,” said Heaven Johnson, 10, who brought up the Rev. Martin Luther King Jr. as an example.

“He made that speech, and he got assassinated,” said Neila Augborn, 10, challenging her classmate.

Judge Chapman, appointed in 2010, said her work overseeing major corporate bankruptcies connects to the mock trial because the project encouraged the students to speak up against injustice.

Judge Chapman also spoke about her career. Some of the students gasped when they found out she had the power to put someone in jail for lying. And on Friday, the students quickly spotted a Japanese comic book on her shelf—a souvenir from a 2011 trial involving the ‘Yu-Gi-Oh!’ royalty payments. (Judge James Peck, who retired in 2014, handled the Lehman case before Judge Chapman.)

At the end of the trial, Judge Chapman declared Mr. Turner guilty but didn’t sentence him to death.

“We can understand why he acted the way he did, but we have to uphold the rule of law,” she said.