"I didn't think we would be putting the computers together by ourselves; it was really interesting to see the process from start to finish."

“We were so excited to collaborate with Kano in creating this pioneering, hands-on, Tech Jam experience for our students," said Ian Rowe, CEO of Public Prep Network. "We believe that STEM and computer science are secret weapons that can unleash curiosity, experimentation, and fun, while empowering our girls to build robust content knowledge and strong vocabulary, which supports achievement in other content areas.”

Girls Prep is committed to preparing the next generation of female scientists, technologists, engineers and mathematicians. Beyond this Tech Jam, Girls Prep has STEM related partnerships with Cornell University, Annapolis Naval Academy, High School of Math, Science and Engineering at City College, among others – and offers science five days a week from dedicated science teachers starting in elementary school.

“K-12 computer science education, while on the increase, is still lacking in the nation’s public schools, particularly among girls and underrepresented minorities.” said Diane Levitt, Cornell Tech Senior Director of K12 Education and National Chair of CSEd Week. “This special Tech Jam went way beyond the Hour of Code celebrated during CSEd Week. In addition to learning the Pixel Hack software, Girls Prep scholars actually built a computer—giving them a deeper understanding of how technology works, and the agency and computational thinking to understand and build in the digital world."

"We're thrilled for our partnership with Girls Prep, with their devotion to instilling in their students a love for science and promoting curiosity," said Joanna Bersin, Head of Education, Kano. 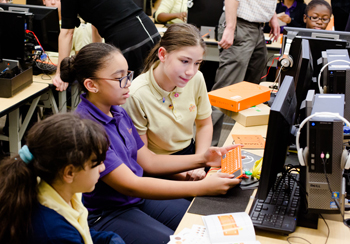